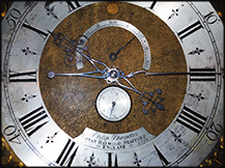 The clockwinding tradition originated when John Rigby and Sons, Ltd. of Manchester, England, presented the Wire Association with a 400-day grandfather clock at its Annual Convention in Pittsburgh, Pennsylvania, on October 20, 1948. The gesture, which represented a group of 32 companies from Great Britain, was made in appreciation of the support given by the U.S. wire industry to Great Britain during World War II.

Each year a representative from the U.K. makes the trip to the U.S. to participate in the annual ceremony that commemorates the friendship and communication between the two nations.

The clock resides in the lobby of the Wire Association International, Inc. headquarters in Madison, Connecticut.

A history of the clock ~ at the time of presentation ~

The massive mahogany case standing about eight feet high was made about the year 1770. The brickwork ornamentation of the plinth and clusters of fluted columns to the head are noteworthy features, the latter being quite unusual. The Corinthian capitals and other metal ornamentation are picked out with gold. As the dial door is not constructed for frequent opening, it seems very probable that this case was originally made for a three month or longer period clock. To open this door the two pegs at each side are withdrawn and the door frame lifted down. There are no hinges. Although about 178 years old, the case is in very good condition and has been carefully restored and processed against woodworm. The movement and dial have been newly constructed by the writer in keeping with the requirements of the case. The movement (of the clock) is designed to run for 400 days without rewinding.

A small number of these year duration clocks were made in London in the early 18th century by the celebrated makers, Thomas Tompion and Daniel Quare, and there are also a few examples of provincial make and later date. The year- long case clock was a luxury demanding too much skill in construction ever to come into general use although the aesthetic and practical value of an “anniversary clock,” as they could appropriately be called, are worthy of consideration. The older examples frequently required an 80 lb. weight to drive them. The maker of the present clock employed the general principles of the old craftsmen while introducing some of the facilities of later days such as Geo. Graham’s dead beat escapement and Skefko ball-bearings on the heavily loaded barrel arbor. Using, as it does, a 40 lb. weight, the efficiency of this clock becomes about 13 times that of a common eight day long case clock. The falling of the weight about one eight thousandth part of an inch keeps the clock going one minute during which time the pendulum travels about 135 inches. Pinions of 12 leaves are used throughout the train and the total gearing ratio is 34,560 to 1. Shafter maintaining power is fitted which keeps the clock going while being wound and prevents the key being inserted until the maintaining power has been put into operation. Double click-work is fitted to the barrel for safety in winding. The pendulum is an “Invar” rod with lenticular bob provided with graduated rating nut for coarse adjustment, and a small shelf for small weights, for fine adjustment without stopping the pendulum. A degree scale is provided, the escaping arc being 1 degree each side of zero and the swing arc about 1 degree, 30 minutes. The delicacy of a clock of this kind is shown by the fact that the hour hand, as well as the minute and seconds, has to be balanced. Guides are fitted to the case to prevent the flat weight from twisting.

The lacquered brass and silvered dial is hand engraved and bears around the arch an ancient sundial motto reminding us that “Time can neither be kept nor destroyed,” “Tenere non potes nec perdere.” In the arch is a rotating sphere moon showing the phasing of the moon around which a hand points out the age of this luminary. The hour and minutes are indicated on the usual 12-hour circle, the seconds being given on a sunk seconds dial, below the center of the dial. The matted dial center is relieved by a segment of a circle on which are pointed out the number of days which have elapsed since the clock was wound. The hand pierced hands are of blue steel and the corner pieces are spandrels of brass, pierced in scroll work pattern, and finished to give a damaskeening effect.

How to resolve AdBlock issue?

We noticed you’re using an ad blocker, please consider disabling so you can enjoy the free content wirenet.org offers.

By continuing to use our websites, products or services, you acknowledge that you have read and agree to the terms and conditions.
I accept